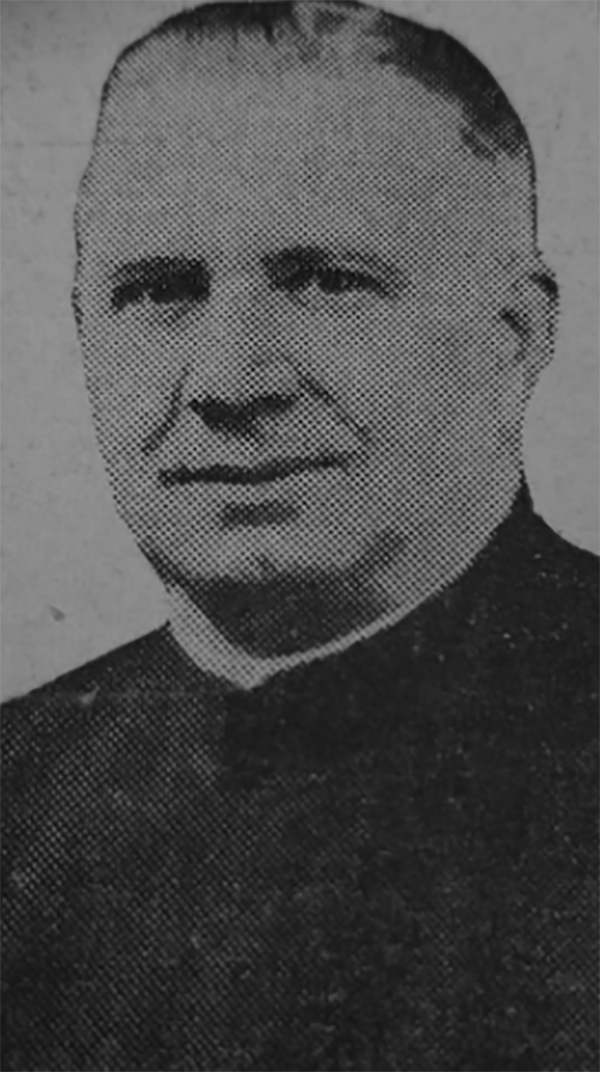 When the Rev. Thomas C. Fox began his ministry at Hannibal in the fall of 1919, a grocery store served as the sanctuary, and a dry goods box was the altar.

Called to Hannibal from St. Stephen’s Catholic Church at Indian Creek, Mo., his task was to launch a second Catholic Church for Hannibal, which was initially named the Church of the Incarnate Word.

In Hannibal, Arch Street (both north and south) would serve as the new dividing line for Catholic families; those to the east of that line would continue to attend the Immaculate Conception church, located and Sixth and Lyon streets. Those living to the west (an estimated 125 families) would attend the new church, which was planned for the southwest corner of Broadway and Hayden streets.

Before the first spade of dirt could be turned on the church property, Rev. Fox had relocated to Hannibal, and was ready for work.

The description of the aforementioned grocery store and the dry goods box come directly from Father Fox’s obituary, which was published Oct. 7, 1954 in the Palmyra Spectator. His early accomplishments were reflective of the pride he took in compiling a strong, Catholic parish (later to be renamed Blessed Sacrament) from those humble grocery store beginnings.

The name Van Evercooren had been associated with the grocery business on Hannibal’s West End since before the start of the 20th century.

Joseph Van Evercooren came to Hannibal from Belgium with his German-born wife, Julia, and son, August, in the mid 1870s.

By 1888, Joseph Van Evercooren was deceased, and his son August was operating a wholesale and retail grocery business out of a frame building at 291-295 (later 2205) Market.

August Van Evercooren died in 1901 at the age of 43, leaving his wife Ellen (with two young sons) and his elderly mother, Julia, to manage the family business.

Julia Van Evercooren died in December 1904 at the age of 85.

Ellen and her two sons, Charles Paul and Robert, took over the facility’s management, for a time renting out the Market Street property to other businesses.

The family underwent a major setback in mid December 1909, when, on a bitterly cold night, their frame buildings on Market Street burned.

The buildings were occupied at the time by E. Newton Perkins and Christopher C. Via, grocers; Henry Morawitz, meat market; and a minority-owned business, (William) Anderson and (Ralph or Rafe) Newbolt, cigar store.

The family rebuilt a two-story brick structure in place of the frame buildings.

Charles Paul Van Evercooren would soon take a leadership role in expanding the family’s grocery operations. Paul (as he was known) Van Evercooren was certified as an assistant registered pharmacist by the State Pharmacy Board in 1911, following a two-days’ examination at Springfield, Mo.

This is believed to be the building where the first gatherings of the Blessed Sacrament congregation would take place, in 1919.

At the beginning of 1918 (when Charles Paul was 26 years old) the family’s grocery two stores were located at 2205 Market and 733 Grand Ave. The business was known as P. Van Evercooren & Co.

On October 28, 1918, Paul succumbed to double pneumonia, complications of the Spanish Influenza. He never married, and had no children.

This left Ellen and 20-year old Robert Van Evercooven to run the family business, which they expanded to three stores, 2205 Market, 733 Grand Ave., and 712 Broadway. They moved into living quarters above the Broadway store, where they were joined by Benedict Joseph Flaget Lilly, Mrs. Van Evercooren’s aged father. He died in 1932.

For many years, a two-story, red-brick house with an east-facing wrap-around porch stood in the center of a large lot on the southwest corner of Broadway and Hayden, where Hannibal’s new Catholic church was to be built.

Living in the house for the decade before its demolition was Charles W. Hanes, a public works contractor, and his extended family.

Demolition of the house began in mid September 1919.

That same month, Rev. Father Thomas C. Fox purchased a brick bungalow still under construction, located on Virginia Street. W.J.A. Meyer was the real estate agent. Rev. Fox was to move into the house as soon as work was completed.

In addition to his work at the new church, Rev. Fox also served as long-time chaplain for St. Elizabeth Hospital, which was directly across the street from his house.

When the basement of the new church building was complete at Broadway and Hayden, services were moved to the new site.

The cornerstone for the new church, by now renamed Blessed Sacrament, was laid in 1921.

An early funeral at the church was conducted in December 1921 for Mrs. Gertrude C. Hufschmidt. Rev. Father Fox celebrated a requiem mass.

At least three times in the early years of Blessed Sacrament Church, (1921, 1923 and 1926) Mr. and Mrs. Oden Shields Rogers (nee Mary Alice Bick) hosted the congregation for an all-day, July 4th picnic at their country home.

Mr. Rogers purchased “Woodside,” which was Mrs. Helen K. Garth’s summer residence in Ralls County, In February 1911, paying $15,000 for the house plus 66 acres of land. Mrs. Garth spent the following summer at Woodside, and Mr. Rogers took possession in the fall of 1911.

In 1921, a chicken dinner was served at noon, and music was provided for dancing on the grounds.

Transportation to Woodside was furnished free of charge, from the end of the Oakwood street car line.

Mr. and Mrs. Rogers continued to live at Woodside, raising their three children there. Oden Shields Rogers died at his home June 7, 1941. Rev. Fox officiated at his funeral.

In two stories in the July 4 and 11 editions, the location of the Van Evercooren buildings was incorrect. The buildings were located at 291-295 Market St., the numbering later changed circa 1912 to 2205-2207 Market. The building has been demolished. This author regrets the error and apologizes for any confusion this reference caused. The mistake has been corrected on the website: www.maryloumontgomery.com

Mary Lou Montgomery retired as editor of the Hannibal (Mo.) Courier-Post in 2014. She researches and writes narrative-style stories about the people who served as building blocks for this region’s foundation. Books available on Amazon.com by this author: "The Notorious Madam Shaw," "Pioneers in Medicine from Northeast Missouri," and "The Historic Murphy House, Hannibal, Mo., Circa 1870." She can be reached at Montgomery.editor@yahoo.com Her collective works can be found at www.maryloumontgomery.com